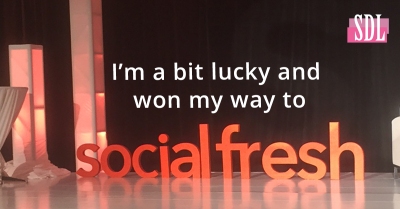 Have you ever entered a contest, completely forgotten about it, then found out you won? In no ways am I bragging when I say that this happens to me more than most people. And it’s exactly what happened when I received and email from Jason Yarborough, Social Fresh Director of Strategy, congratulating me on being the winner of the coolest prize Social Fresh has ever given away, the Grand Prize VIP Social Fresh 2015 Prize Pack!

As a social media manager, I’ve personally conducted contests for the brands I promote where I cannot get in touch with the winners. It kind of stinks. You have this awesome prize and no one will claim it. But now I was on the flip side! My friends and family tell me that I have “a horseshoe up my ass” because I am generally lucky; I’ve won huge party prize packs, first row concert tickets galore,  sports and tech gadgets, and even a chance to be on the Jerry Springer show (as an audience member, of course), but I’ve never won something this big before. To make sure this was legit, I actually called Yarby. He sounded as confused as I was, but maybe because I was interrupting his lunch break while he was letting his dog out.

So yeah, it was real. And it was AMAZING. I traveled from Chicago to Tampa on September 22 and spent three days networking and learning from some of the best-of-the-best in social media, content and digital.

I’m here, #Tampa! Am I’m SO ready for some rest to get extra #SocialFresh in tomorrow’s workshops. Thx @socialfresh! pic.twitter.com/2MG9e7B5fr

I owe a BIG thanks to all the fresh folks who helped me get to the conference, where I learned about digital marketing, community and the power of email; met some amazing people who I am still in contact with; and just had a blast overall! I was even able to squeeze in a dinner with some family members that I haven’t seen in almost 10 years. All of this wouldn’t have been possible with out the help of Yarby, Jason Keath and Nicole D’Alonzo.

(NOTE: I approached Yarby at the Patron opening party to personally thank him for the prize, in which he responded, “Don’t thank me. Thank the Internet.”)

I’ll be following up with more blog posts on my takeaways from the individual workshops and sessions. Feel free to peruse my Twitter contribution to the conference hashtag, #SocialFresh, for my real-time takeaways!